So I just got home from a very interesting and quite surreal night. I don't want to seem like I'm bragging or trying to 'big time' anybody, but have to share a pic (see below). Taken in Forrest Lucas' mansion, after a couple hours of chatting and more than a couple drinks with him (hence the eyes spontaneously closing when the flash went off)

. And, just for the record, think he had a thing for the girl I was with, perhaps not so much my witty conversation that was keeping him around. 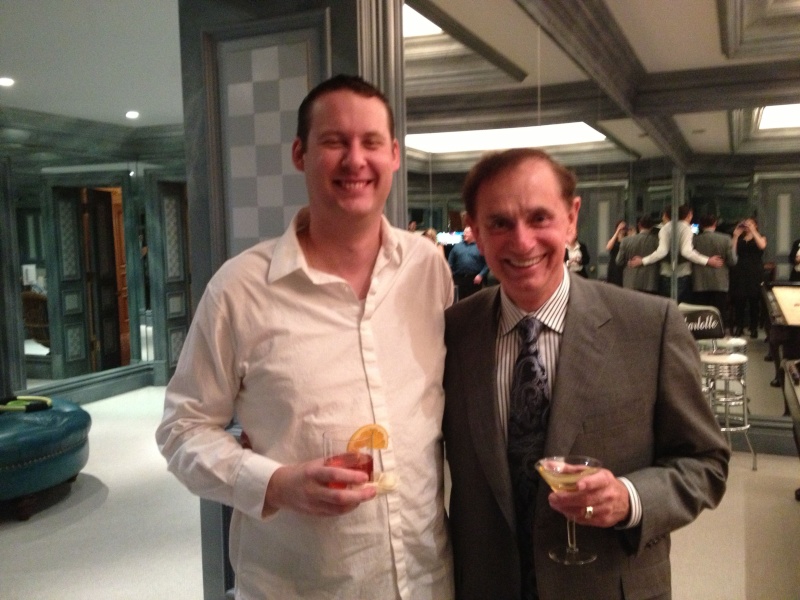 Like Lucas Oil, Forrest Lucas?! Dude that pretty sweet. What was the mansion like? And by your lady companion I assume you mean the wife correct? So what was the party about? Dude I'm jealous. Where's my invite?
_________________
I will diesel you!
Drive it like you stole it

I just googled his mansion. Holy snickies man! Did you get lost in there? That place is flipping enormous. Dude now I'm super jealous!
_________________
I will diesel you!
Drive it like you stole it

If it weren't for Low's post, I'd have no clue who dude was. And I wouldn't consider it bragging.

In any case, in this pic, you can actually see Joe having a real smile. Congrats on the fun. Did you get any souvenirs from his house?

LOL.... The guy who played Quark on DS9 was on last week's episode of Castle...

BTW Joe, this is awesome... I had no idea who Forrest Lucas was when you posted this, but after a quick trip to Google, I now know.... You should go to school for something in the realm of automotive and get a job with an Race team or something!

OK, so here's the full story. I signed up several years ago on Patron's website for their 'Secret Dining Club'. They put on tasting/dinners at various cities over time. I never thought much about it, just hoped maybe they'd send me some interesting recipes or a coupon sometime. Got an email last week that they were coming to Indy, click to enter for a chance to attend blah blah. Found out Sunday that I was selected, pretty stoked. So last night I headed to a hotel lobby with a nice single girl in tow. Usually how a divorce story starts, but in this case it was a mutual friend of my wife and I (wife likes neither tequila nor 'fancy' food).

So I was thinking, huh, hotel lobby an odd choice, I thought it would be held at a restaurant. Host arrives, takes us outside to get on a shuttle bus for an unknown location. Now thinking, yeah OK, this is fun I suppose, wonder which restaurant we're going to? Then we pull up to a gated estate so large you can't even tell what's inside. Start winding up the driveway though the state-park sized grounds, and when we finally got to the mansion the bus was dead silent. Patron logo projected onto one of the side buildings, was a pretty awesome shock to realize this is where we'd be hanging out.

I'll skip all the 'how awesome this place was' stuff, will just post some pictures once I get them from my friend. While enjoying my first drink, guys next to me start talking to some old dude, notice they call him Mr. Lucas, so I put the pieces together. After he chats for a minute or so with them he seems a little lost, everyone else apparently scared to death to talk to him or make eye contact for very long. So I go thank him blah blah, ask a question about the room we're in, and it turns into a tour of the house. I mingle around some more until we go downstairs for the dinner (which was just amazing, with things you'd never think could be good but are - think radish sauerkraut), and who sits down next to my friend and I but our new pal Forrest. My kinda unusual and diverse background comes into play (as does his), and we spend the next couple hours talking about racing, cattle farming, marketing, and oddities of food/culture when abroad, while my friend cracks him up with her razor-sharp wit that usually scares the bejesus out of most men (think she got a law degree just so she could mess with people more effectively).

Anyway, no job offers but a pretty entertaining evening. Have to say I may be more likely to use Lucas products after talking to him. Seems to be a genuinely good guy, grew up dirt poor and went from being a truck driver to where he is now by having an uncommon knack for marketing and endless drive to succeed. Gotta respect that. So that's it, I'll post the pics when I can.
_________________
formerly 'V & V'
Now just one V

You've gone about this all wrong.

You're supposed to put up pics of the friend first. We don't need to see you and the old man.

Sounds like an awesome night... Opportunities like this don't come around to ordinary folks that often, and this sounds like a story that you will have to spin for quite some time! Great stuff man!

Indeed! Good on you for going on dining adventures. I never gave a damn about food before my wife came along.

Now I actually appreciate stuff and enjoy food more. It's good for yah! Can't say I've ever met awesome people as a result, but that is certainly a badass bonus. More pics!